When the total solar eclipse in 2017 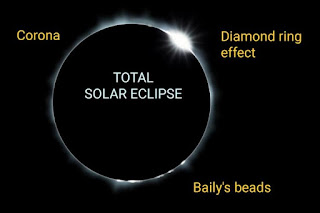 source: www.timeanddate.com
A total solar eclipse occurs when the whole moon disc covers the solar disk. Because at that time the size of the moon disk is larger than the size of the sun disk then the entire solar disk will be covered by the moon disk. As a result, the sun disk that had been light seemed to disappear and caused a night in a very exotic day. Even stars and planets will be visible when the total solar eclipse. 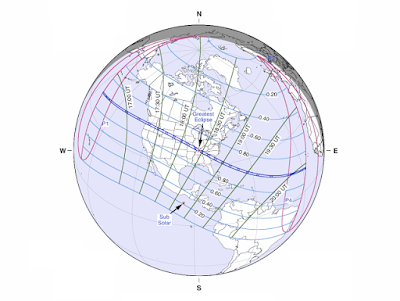 How To View Solar Eclipse

The safest way to observe the eclipse is when the sun is slowly covered in the moon and the condition of the sky gradually darkens (partial solar eclipse) is recommended to use filters or special glasses to see the sun. How to see it also do not be too focused because at that time the sun has not all closed and some sunlight is still gushing strong can damage the retina of the eye.

"So watch a few minutes, not too cool, occasionally look elsewhere and not focus on the sun it will be safe,"

When the sun is completely closed and the sky darkens, the filter that protects the eye can be removed. The beauty of the total solar eclipse can be witnessed directly with the eyes. But keep in mind, do not stay too long because the total duration of this total solar eclipse is only 2 to 3 minutes. After that, the sun will part and the sky is clear again. As the sun begins to drain, the eye filter should be used so that sunlight does not damage the retina.

"When the moon begins to fall apart from the sun, the bright sun discs will blind once the pupils are enlarged and that can damage the retina of the eye,"

About the place, suggest seeing it in a field location that is not blocked by trees or other objects. For example, beach, field or high place.

To be able to enjoy the solar eclipse in 2017, there are rules that should always be remembered.

The rule is when the sun is still visible in the sky, never see the sun with eyes without tools. Use sun filters on sun glasses during observation. Do not use sunglasses, exposed films, CDs, or other filters, as they may harm the eyes.

When the totality occurs for 2-3 minutes, the sun is not visible and the observer can see directly into the sun's corona. However, as soon as the totality ends and the sun appears again, wear eclipse glasses equipped with a solar filter to watch a partial eclipse.  source: detik.com

More information about the solar eclipse 21 August 217 can be seen at https://en.wikipedia.org/wiki/Solar_eclipse_of_August_21,_2017

You can also see the countdown time when the total solar eclipse on this website.    https://www.timeanddate.com/eclipse/total-solar-eclipse.html