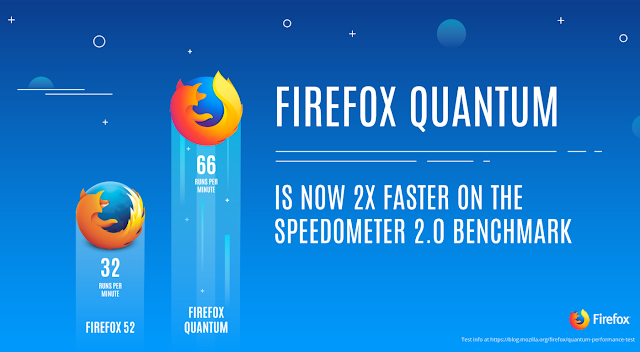 in the 2000 era Firefox is one of the fastest growing browsers but lost momentum when Google Chrome appeared, but Firefox is ready to get back on track after launching its newest browser Firefox 57 can be called.

The company claims the Quantum 2x Firefox browser is faster than its default browser, with a sleeker look and faster speed performance than Chrome in browser speed trials. Another new feature of Quantum Firefox is a smaller RAM memory user than its 30% Chrome competitor.

While competing against Google in the browser space, Firefox uses Google as the default search engine in the US, Canada, Hong Kong and Taiwan. For years, Firefox used Yahoo as the default, though it also offered Google and Bing an alternative choice.

Personal browsing mode for Quantum Firefox looks just as good as normal browsing. The purple masked symbol on the right shows the mode you are using, and Firefox protects against tracking by default.

Quantum is a project open to volunteers, with about 700 authors contributing to the code. It took Firefox a year to complete this project.

The Quantum Firefox browser can be obtained for Android, iOS, Linux, Mac, and Windows, via the FireFox official website.