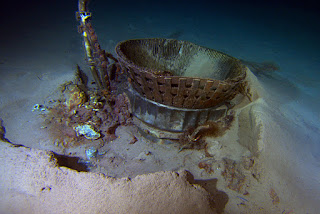 pict: kiwispace.org.nz
Point Nemo which means "Nothing" in Latin is at coordinates 48 degrees 52.6 minutes south latitude and 123 degrees 23.6 minutes longitude west. Also known as the Remote Point of the Ocean, Point Nemo is about 2,250 kilometers from the surrounding land. The remote location is what makes Point Nemo suitable to be tomb space rides.
"Its most attractive structure to be the site of the return of spacecraft and no one living there," Stijn Lemmens, a space space expert at the European Space Agency, told AFP.
This location is not too biologically diverse. so, it is used as a dumpster, or more modestly 'graveyard spacecraft', the majority for cargo spacecraft. So far, Point Nemo has become the final resting place for around 300 spacecraft. Between 1971 and mid space, space agencies around the world have thrown out 260 spacecraft at this point.One of the largest objects in this cemetery is Russia's MIR space lab that weighs about 120 tons. The giant fell to Point Nemo in 2011. Now, the most commonly used Point Nemo is Progress capsule. The spacecraft, said Lemmens, is used to back and forth to the International Space Station by Russia. However, in the future Point Nemo may no longer be a place of exile spacecraft. The reason, spacecraft of the future will be designed to burn completely in the atmosphere. NASA and ESA, for example, replaced their fuel tank material from titanium to burned aluminum at lower temperatures.
As happened recently, Monday (2/4/2018), Tiangong-1 finally returned to Earth at around 07:06 pm. The 8.5-ton space craft did not burn entirely in the atmosphere and eventually fell in the Pacific Ocean.

According to astronomer Jonathan McDowell of the Harvard-Smithsonian Center for Astrophysics, Tiangong-1's last location is south of the Pacific Ocean near Tahiti. That is, Tiangong-1 fell not far from the tomb of spacecraft, Point Nemo.