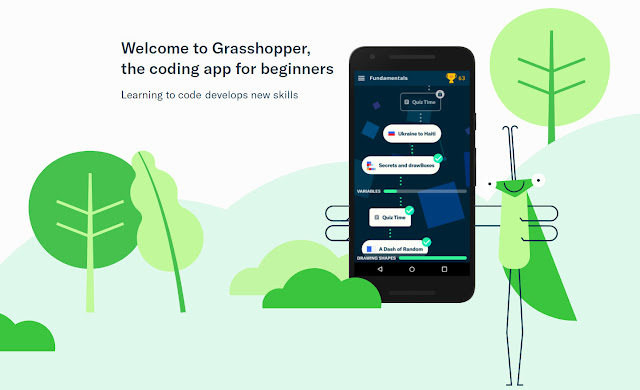 
Google released an app that helps novice programmers learn about JavaScript programming, titled "Grasshopper". The app is spawned by an in-house incubator or a Google-owned training area called Area 120.


One of the engineers who worked on the application said if Grasshopper aims to facilitate the beginner programmers.


He added if the need for coding capabilities is on the rise nowadays. Learning programming was made even more fun, all done using simple puzzles and quizzes. So it can be done during leisure time.


The Grasshopper app can be downloaded from the Google Play Store on Android devices, in this link and the App Store on iOS-based devices at the following link.


Once installed and signed in using Google account, users will be given a little introduction about what coding is. The application will tell you that the programming language that will be used in the Grasshopper application is JavaScript.


After starting, the user will be presented with a quiz with several question choices. The longer, the higher the difficulty.


After completing the quiz, the next step is called "fundamentals". At this stage, the user will learn the function, create variables, control the code flow, and so use JavaScript.


This stage will be learned through the puzzle game media. The first puzzle is to draw a French country flag that is vertically shaped using coding.


Followed by drawing the flag of Gabon country in horizontal shape with a higher difficulty level. After completing the game, users can see how many concepts or steps have been successfully achieved and how many JavaScript keys have been used.


The app also offers its users to schedule training, either daily or just a few days a week.


Inside the app, Google mentions if JavaScript is a programming language used by more than 70 percent of professional developers.